Cross-posted at A Timeless Affair - A Romantic Vintage Wedding.

If you've ever been over to our apartment, you know that we have a reasonable sized kitchen but not enough counter space or accessible storage. One of the first things we registered for was a kitchen cart.

Deluxe Cuisine Cart with Backsplash: Model 61531
Before selecting this cart from Catskill Craftsmen, we looked at many carts from many stores. We had a couple of criteria that we used.
Many stores sell this cart. We decided to purchase the cart from Macy*s rather than Home Depot (which we would have used MyRegistry.com to add to our registry) as Home Depot was charging $335 - almost $100 more for the same cart.
So when we saw that the first gift that had been purchased was the kitchen cart, we were overjoyed. We pestered my mom almost daily to see if it had arrived. She called us the minute it had. While it arrived prior to Mother's Day, our schedule prevented us from retrieving the cart and assembling it until Memorial Day Weekend. This project was primarily all cubes with a little help from me when needed. While cubes assembled the cart I worked on our envelope liners. 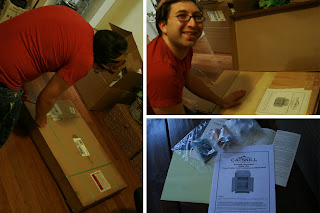 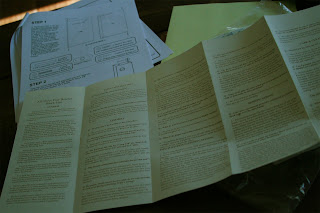 After reading the documentation and instructions and laying out all the various pieces, cubes began assembling the cart. (I took breaks from working on the envelope liners to photograph cubes' handiwork.) 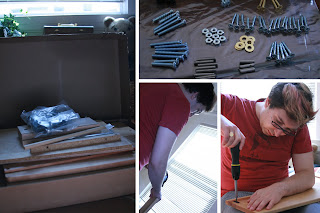 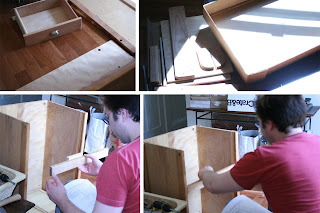 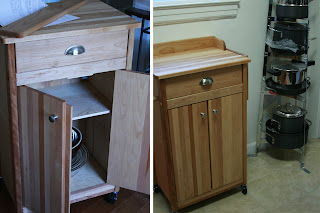 After a couple of hours our kitchen cart was ready to report for duty. If you're looking for a kitchen cart for your home, definitely consider Catskill Craftsmen products. They're easy to assemble and well built. Our cart is now filled with mixing bowls, a hand mixer, pie plates, and baking utensils (pie weights, cookie cutters, cookie dough gun, etc.). We're looking forward to using it for a long time to come.
at 6:20 AM