We just can't get enough cooking. This past Sunday to celebrate Mella's birthday, we ventured into the crisp weather with Relish Culinary Adventures to forage for wild mushrooms on the grounds at D.H. Gustafson  Family Vineyards.


Overall score: B-
Our Day:
The four of us got up early and scrambled into our CRV. We somewhat followed directions on how to get to the forage site, taking an earlier exit Dry Creek Road versus Canyon Creek Road off 101. The drive was gorgeous. Many of the vines were orange and red.
As usual we were the first to arrive on scene. Once everyone arrived, we gathered around to learn about how to spot mushrooms and what to do once we found one. Then we were off. 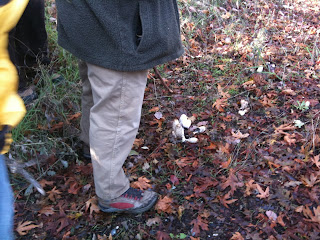 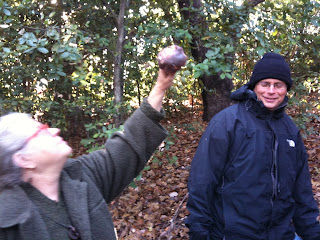 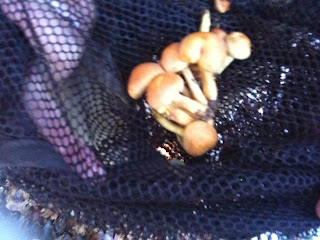 While others in the group found edibles such as chanterelles and boletes, the four of us did not. 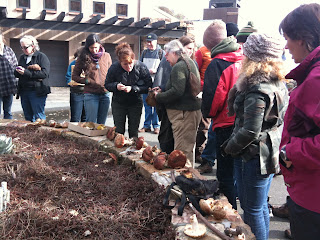 I did manage to trip over a bolete. (It already had a few bites taken from its cap so it wasn't edible.) Mella found witch's butter, an edible mushroom with no taste; a bunch of dyeables; and other interesting looking mushrooms. 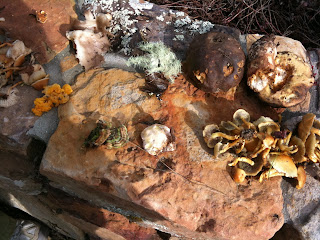 Luckily the cooking portion of our class was not dependent on our morning's haul. In the past I've foraged along the coast near Fort Bragg having much more luck finding mushrooms amidst pine needles.

Elissa Rubin-Mahon helped us identify what we found, showed us how to determine whether edible mushrooms could be eaten fresh or should be dried, how to clean the edibles, and how to prepare some simply - light olive oil (not EVOO) for boletes (thin slices from the stem rather than the caps) and butter for chanterelles (torn lengthwise to show what you're eating rather than chopped into unidentifiable pieces). For those interested in cooking wild mushrooms, Elissa recommended Antonio Carluccio's A Passion for Mushrooms.


After enjoying the outdoors for a couple of hours we returned to Healdsburg and the warmth of the demonstration kitchen at Relish. It was nice to get to sit back and watch while we noshed on Porcini Cracker Bread and sipped wine from D.H. Gustafson Family Vineyards. Don't think that we weren't paying attention. We were. When Elissa used olive oil with the Boletes where she had used butter with the Chanterelles I asked why. Mella and I also were writing copious notes and photographing. 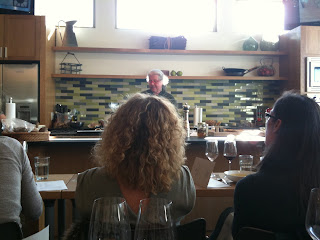 Relish provided recipes in a folder to all participants. With the recipes it was easy to determine whether or not you could eat something but some people might not be reading closely. I skipped the dessert which featured Candy Cap Mushrooms as it had yogurt in it. Feedback that I had was that they note allergies of participants so that they can call attention to courses that some should avoid.
Mella and I brought back some dried Candy Caps (smell is similar to maple syrup) that we're going to make into something. Maybe we should try The Dye Garden's Candy Cap Mushroom Cookie recipe at the cookie bake this weekend. Or Millard Family Mushroom's Candy Cap Coffee Cake recipe. Or Cupcake Project's Mushroom Madeleines as we learned how to make Madeleines at our Gourmet Retreat. (We won't be making Cupcake Project's Mushroom Cupcakes. Like the Rustic Cornmeal and Candy Cap Cake served on Sunday, the cupcakes also have yogurt as an ingredient.)
What would you like us to make with the dried candy cap mushrooms?
at 11:11 AM