For those who aren't Jewish, Passover (Pesach) started Monday at sundown and continues for seven days. Typically friends and family come together at least once for a Seder to retell the story of the Jews' exodus from Egypt. (For a general description of The Seder Plate and what each item represents, visit Chabad.org.) 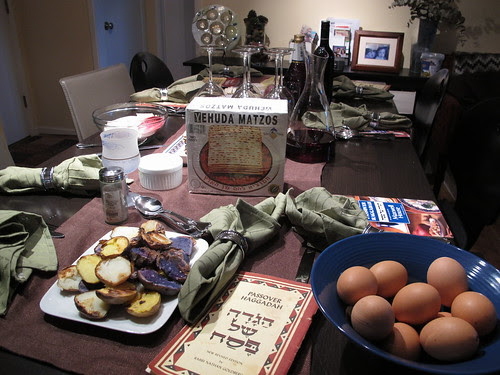 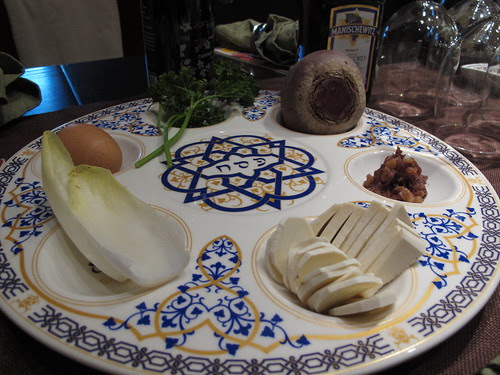 Last night we joined two of our friends, Tracy and Aaron, at their home for a Seder. Aaron led it from two Haggadah. One thing you'll notice as you attend more than one Seder is that each family has their own telling. A Seder varies based on where a family traces their roots from (Eastern Europe or Middle East, for example) and whether or not children are present.

Last night's Seder had parts in Hebrew, Aramaic, and English. I really enjoy the Hebrew and Aramaic as they're very poetic. The English translation or equivalent is more terse. If you want an English Seder that's more poetic, check out Rabbi Scott A. Gurdin's Haggadah (PDF) which is set to a Dr. Seuss cadence. Rabbi Gurdin's Haggadah also includes the phonic pronunciation of the various Hebrew songs (for example, DAYEINU) so that if you don't read Hebrew (like me) or know the songs by heart (like me) you can still sing along.

You can see more photos from last night's Seder on Flickr, including the Matzo Ball soup and Vegetable Stew that we ate for dinner.

Credits: All images taken by Eden Hensley Silverstein for Recipes for the Good Life.
at 11:11 AM