Food Fun: How to overcome an irrational fear

of eating food in public with people watching? The answer - be a judge at a food festival. How to overcome being uncomfortable in front of cameras? The answer is the same.

I bravely (although inadvertently) faced these two fears this past Saturday when I volunteered to step in for a judge at BaconCampSF (photos by Dave Schumaker, Rod Begbie, and Only_Taciturn). Maybe it was the heavenly smell of bacon permeating Chez Poulet that clouded my judgement. Maybe it was just my insane love of the stuff. But regardless of motivating factor I found myself front and center. 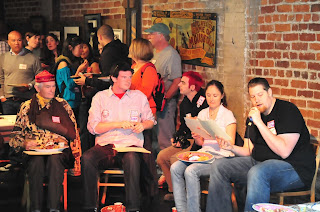 (Source)
Besides the obvious challenge of how one survives eating over 30 bacon dishes, a judge has other challenges they must face.
First: Ignore the audience and the cameras and focus on the food. 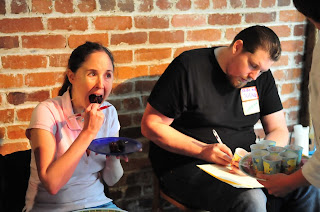 Here I am giving my full attention to a "Moink" or a bacon-wrapped meatball.
(Source)
Second: Establish a framework for your votes.
For me, I realized that not all entries would be served at a temperature chosen by the contestants. I tried to be very conscious of how dishes would taste if for example served right out of the kitchen (Chicken Fried Bacon with Sausage Gravy or Bacon-wrapped Scallop Sliders) or from a chafing dish at a reception (White Wings). I also tried to think about the texture and combination of flavors. Finally I thought about whether the addition of bacon made a dish better or worse. (Bacon doesn't always make something better!) I love Bloody Marys and I love miso soup. Two of my personal favorites from judging were a Bacon Bloody Mary and a Miso Soup with Bacon Tadashi.
Third: Roll with the boos.
You can't like every dish. Each judge has different personal biases - that's why there are multiple judges. The audience isn't going to agree with all of your decisions. Don't take it personally. Remain consistent with your scores.
Four: Be nice.
Just because you don't like a dish doesn't mean a lot of time and effort went in to its creation. There's always something you can say that's positive.
Check back tomorrow. I'll have photos from Vadim Akimenko of Akimenko Meats' demonstration of how to butcher a whole pig.
at 7:18 AM