When we got engaged, cubes' mom Robin and Norman came out to visit us. I'd met most of cubes' immediate family before the Burning Man engagement, but hadn't yet met Robin. So for our first meeting and dinner, we decided to we'd treat ourselves to a dinner at a Michelin-Star restaurant. Timing was somewhat tricky as the nights we had available were Sunday and Monday. We chose Range.
Last year Range was amazing. The food wowed. Trout with Kimchee. 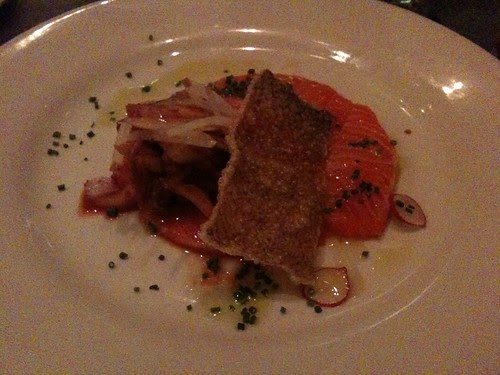 Even with dairy sauces removed - the food still wowed. Sole with a lemon mustard sauce. 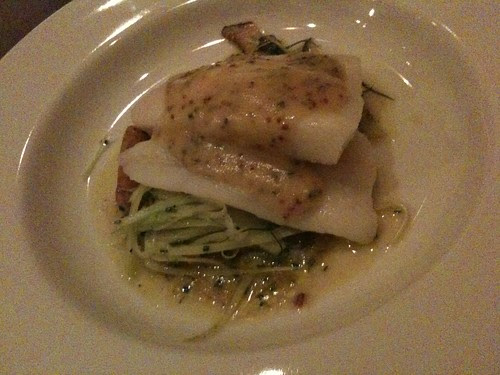 But that was then.

Wanting to share this incredible food, we recommended that @DinnerAllStars arrange for an outing at Range. The food wasn't bad. It didn't inspire my taste buds to sing out. The dessert on the other hand had my taste buds screaming at the top of their lungs. And the waitress's reaction to our consternation had us all a little perplexed.
First... here's the offending dessert - Truffled Goat Cheese with Chestnut Honey. At first glance it looks harmless enough. 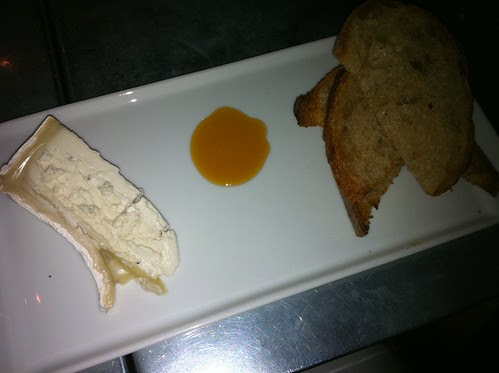 Yet when sampled, the dessert was anything but. A few brave souls tried the chestnut honey. And everyone was at a loss for words. The best we could come up with? "Just wrong."

The waitress went on to explain to us that Chestnut Honey was an acquired taste. She too didn't like it when she first had it, but after getting used to it now liked it. We weren't convinced and I was a little miffed that I'd been given what amounted to a lecture about my food. She did go back to the kitchen. When she returned, she gave us dates that balanced the creaminess and saltiness of the cheese and the crunch of the toast perfectly. Too bad the dates weren't on the plate initially. It was sad to end the meal on a bitter note.
The recipients of the 2011 Michelin Stars for San Francisco were announced last week. As our mini-moon features Michelin-Star dining, I quickly looked up the restaurants we'd selected, curious to see if any had gained or lost a star. No change.
But what I did notice was that Range was one of four local restaurants that lost its Michelin Star. The others were Chez Panisse, Fifth Floor, and Michael Mina. Based on the difference in service between our first visit and our @DinnerAllStars outing the loss is not a surprise. Hopefully the team at Range regroups.
On the plus side, one of the restaurants we selected for dining during our mini-moon, Michael Chiarello's Bottega, was just added to The Michelin Guide's SF Bib Gourmand Picks for 2011. Thank goodness we booked early.
at 2:22 PM